The  recommendations concerning Central Paramilitary Forces (CPMFs) are covered under Ministry of Home Affairs  in Chapter 7.19 of the Sixth CPC report .The CPMFs comprise of the following 7 outfits.

Assam Rifles which originated as Cachar Levy in 1835 is presently having more than 63000 personnel (46 Battalion) .The force working under operational Control of Army guards Indo Myanamar border .

The Border Security Force (157 battalions) has been deployed on international borders since 1965 and also in anti insurgency operations.

Sashastra Sena Bal which started as Special Services Bureau (SSB) in 1963 is deployed along Indo Nepal & Bhutan border covering stretch of more than 1900 kms in 20 Districts.

The major demand from CPMFs for being given status of organized Group A Services has not been agreed to on the ground that these services do not fulfill the pre requisites for such declaration as fixed by MHA. In support of it’s recommendations  the Commission has pointed out that substantial number of posts in these forces including those in pay scale of 18400-22400 are filled up by drawing officers on deputation from IPS and also pointed out that many intermediate grades do not exist in the hierarchy of these organizations. The Sixth CPC has also reiterated it’s philosophy of avoiding creation of too many services.

Commission has also not agreed to creation of certain additional posts demanded by CPMFs for creating promotional avenues on the ground that there should also be functional justification for posts . It has  felt that the provision of ACPs and the system of Running Pay Bands would minimize the grievances of such nature.

On the positive side the Commission has recommended the merger of the post of Addl DIG with that of DIG (16400-200000) . It has recommend that all posts upto the rank of DIG and 50% posts in the grade of IG and equivalent should be filled by promotion from officers of CPMF.

The following pay structure has been recommended for non gazetted executive cadres of CPMFs. 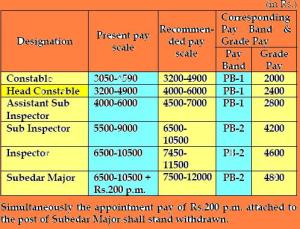 Commission has also noted that except for CISF all CPMFs are not filling up posts of ASI in the executive cadre .This step being contrary to order Dt.10/10/97 is affecting the structural parity within the forces . It has suggested that all CPMFs should continue the post of ASI since this is a functional necessity.

Other recommendations made by the Commission  include payment of ration money at par with Armed Forces to existing beneficiaries and doubling of the rates for Detachment Allowance (without linkage to DA) . Rates of Kit Maintenance Allowance are proposed to be doubled with increase of 25% after every hike up to 50% in DA. The rates of Uniform Grant are recommended as Rs.13000/-(initial) and Rs.6000/- (renewal-every 3 yrs).

For taking care of housing needs, facility of Compensation in lieu of Quarters (CILQ) has been recommended for all personnel in SO grade also. Commission has also recommended a new Family Accommodation Allowance at the lowest rate of HRA payable to all CPMF personnel who do not qualify for benefit HRA or CILQ or rent free accommodation for reason of their stay in barracks. This will also be a DA linked Allowance.

Commission has rejected the demand of one month’s extra pay for CPMFs having benefit of 60 days earned leave in a year on the ground that the personnel  are already compensated by this 30 days extra leave.

Another major change suggested is for stopping further recruitments to the cadre of followers and absorbing the existing cadres to -1S pay band with the objective of converting them to Gr.C combatant staff  after suitable training. It has been suggested that all non essential jobs handled by followers should be outsourced.

Recommendations also suggest that the practice of attaching Constables (Suraksha Sahayaks) / combatants at the residence of Officers for attending to Telephone calls  or other such personal responsibilities should be stopped. If any cases of violations of these instructions are found, the salary of constables deployed should be recovered from the Officer concerned. The report states that if any posts are required for such personal tasks the appropriate sanction should be taken and the jobs should be outsourced.

This site uses Akismet to reduce spam. Learn how your comment data is processed.